A HOLISTIC APPROACH TO SPORT PERFORMANCE

Supporting athletes to maximize their performance has not always been interdisciplinary. Indeed, as the performance sciences (e.g., physiology, medical services, strength and conditioning, dietetics) have evolved over roughly the past century, technical disciplines have matured at different rates (i.e., the world’s first sports medicine establishment took shape in the early 1900s, whereas strength and conditioning coaching became popular only in the late 1960s), and as a consequence the foresight to integrate and collaborate has not always been apparent. In addition, a degree of professional bias, ego, lack of willingness to interact, or the absence of respect for other professions, as well as technical disciplines that operate independently from one another (i.e., siloed), have been the norm for many years. Traditionally, a linear continuum from the start of a performance-based problem to the end point (e.g., return to play following injury, or the improvement in body composition) was thought of as a singular approach to managing a strategic process within the confines of a single technical discipline (i.e., medical management of return to play, or nutrition-only interventions to improve body composition). The consequence of this is that technical areas end up working on the same performance issues simultaneously, in a parallel fashion, independent of one another. Looking for a single cause or approach is indeed common, largely due to professional biases, and it is perhaps considered a simplification that seems necessary within the fast-paced environment of sport (16). However, this often misses the importance of the confluence of several factors or circumstances that might best influence a performance outcome (e.g., medical services engaging with psychologists during the management of a rehabilitation, or nutritionists, physiologists, and strength and conditioning coaches all collaborating to improve an athlete’s body composition). As a result, the implementation of discipline-specific silos may in fact create greater problems, and certainly presents the risk of less than optimal performance impact (see figure 30.1). Instead, thinking in more holistic multifactorial terms gives a significantly different perspective, which, while potentially more complex initially, likely poses a wider range of possible solutions both in the intermediate and in the longer term (16). 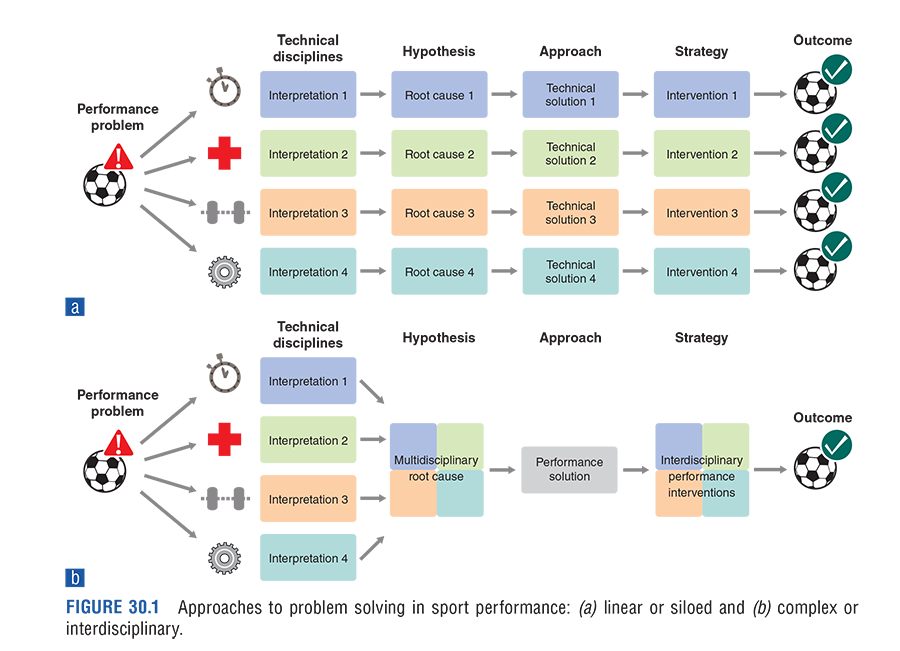 Thanks to our current understanding of basic science, training theory, and performance insights, it is difficult to endorse a siloed approach to performance support as optimal. For example, it is hard to rationalize that postsurgical rehabilitation would be better without the addition of nutritional interventions that reduce systemic inflammation, or that player movement and field position during a match could be comprehended accurately without video feedback from performance analysts, or that training for muscular power could be maximized without an objective understanding of force–velocity characteristics gained through diagnostic monitoring using sport science technologies. Instead, as one evaluates sport and its various components, it becomes more and more apparent that the interplay between technical or tactical and physical or physiological components is symbiotic within the competitive arena. It is impossible to identify where one component stops and another one starts. Instead, the determinants of performance that influence a motor task work synergistically, upregulating and downregulating, in a synchronized fashion and therefore must be considered holistically. Different components are prioritized over others at various times within a sporting activity (e.g., striking with high-velocity actions during combat sports, reducing inflammation following injury, or demonstrating physiological regulation of breathing while shooting during a biathlon), but one cannot view the optimization of sport performance through a polarized lens that suggests any single technical discipline is more important than another. Instead, to truly maximize performance potential, all components of sport performance must be considered holistically as individual cogs that play a critical role as part of a larger machine. Only then can the interplay of technical disciplines (i.e., interdisciplinary) be viewed as the most effective way to maximize the performance, recovery and regeneration, or rehabilitation of athletes (see figure 30.2). 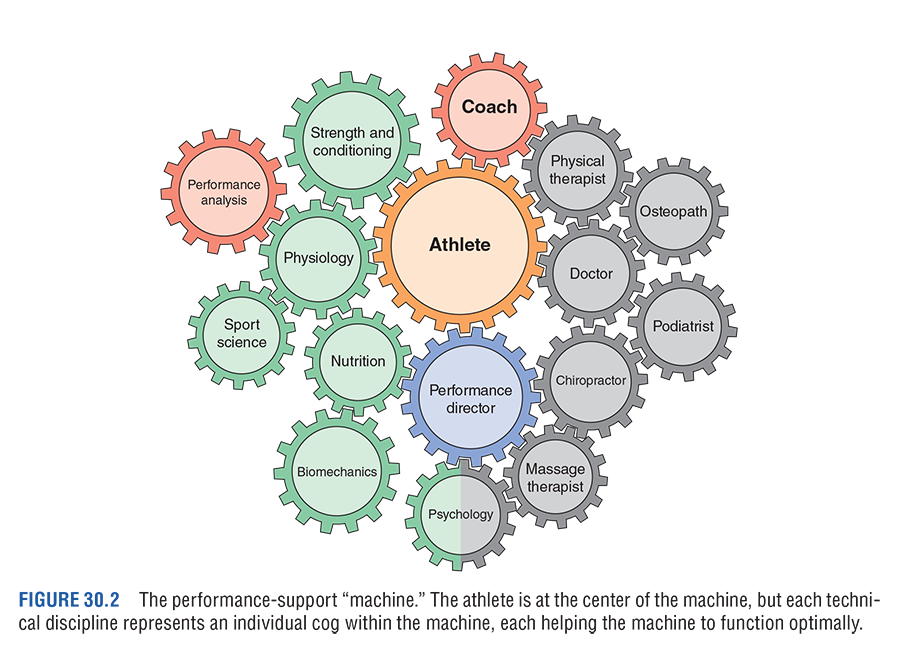