Athlete workloads and subsequent adaptation are fundamental sport science principles (14, 15, 82). The concepts of training load modeling and external and internal workload are covered in greater detail in chapter 2 and part IV of this text. Much of the traditional workload research dealt with performance modeling (8, 9) or designing workouts like interval training schemes (31). Since 2000 (especially since 2010), there has been an exponential rise in research examining the workload–injury association (27, 43). Interested readers are referred to systematic reviews (13, 24, 27, 43, 93), methodological reviews (93), and consensus statements (83) that discuss workload–injury research in greater detail; the key concepts and considerations are summarized here.

Total athlete workloads were associated with injury in early research in basketball (2), rugby league players (44), baseball pitchers (49, 66), and cricket players (68). Most of these studies were performed at the team level, identifying that more players on a team were injured during time periods when the team experienced higher training loads. The challenges to these findings in isolation were that all athletes were grouped together, preventing any differentiation between athletes who might be at different injury risks, and the only logical preventive strategy was to minimize workloads.

Changes in load have been the primary focus of workload–injury investigations since about 2010. The rate of workload progression, like week-to-week changes in workloads, can be quantified in several ways (65, 74). However, the most common measures of workload progression have been some sort of variation of the acute:chronic workload ratio (ACWR). The ACWR compares the amount of training performed recently (usually a week) to the amount of training performed over a longer period (usually a month) (88). All in all, the majority of research that has investigated the rate of progression in training load has shown that injury risk increased as the rate of progression increased (24, 27, 33, 43, 83).

Although research at the team level identified higher injury rates with higher workloads, and athletes may have a theoretical workload ceiling that they can tolerate (42), training allows athletes to prepare for competition demands and develop more robust physical qualities. Therefore, at the individual level it may not be surprising that higher chronic (longer-term) workloads have been identified as protective in several contexts. Runners with a higher weekly training volume (&gt;30 km/week) entering a marathon were half as likely to be injured as those with &lt;30 km/week of training (69). Gaelic football players with higher chronic workloads were more robust to given increases in workload (51), and in some cases, athletes with greater preseason training volumes have been shown to have a lower risk of injury in-season (60, 96).

The workload–injury model (see figure 19.2; 94) built on foundational injury etiology models (6, 54, 55) by explicitly incorporating the workload effects (discussed earlier) on subsequent injury risk (94). Athletes enter into activity with a risk profile, including their previous injury history and a collection of internal risk factors. Some of these factors (e.g., aerobic capacity, strength) are modifiable and change over the course of a season. Other factors are nonmodifiable (e.g., sex, age, anthropometrics). With a given risk profile, athletes engage in training or competition, which is the application of a given workload. This applied workload is the vehicle through which athletes are exposed to external risk factors (e.g., opponent behavior, environmental conditions). 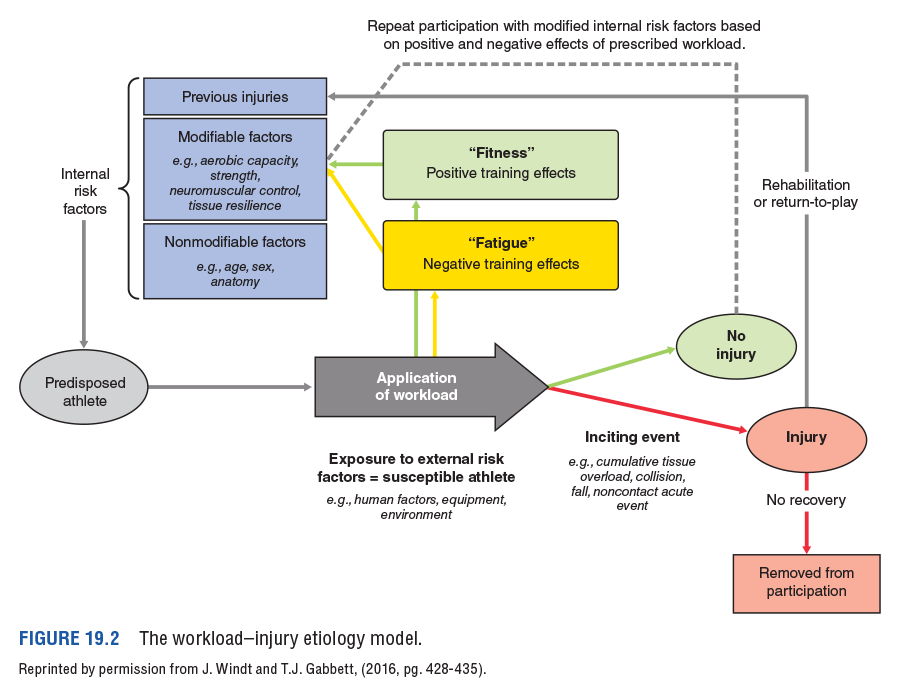 After the training or competition session has concluded, athletes may or may not have experienced an injury through a given inciting event and reenter the cycle. However, their risk profile is now altered for subsequent activities because the act of training or competing affects their modifiable internal characteristics, in accordance with the volume and intensity of the workload applied and the athlete’s tolerance to the load. Some of these changes may be negative, like decreased neuromuscular control in a fatigued athlete following a match. Conversely, the athlete’s risk profile improves over time through adaptation to the applied workloads as physical qualities develop. In summary, the workload–injury etiology model describes three ways in which workloads relate to sport injury risk: