by NSCA's Guide to Tests and Assessments
Kinetic Select May 2017

This article presents information about assessing speed and agility in a controlled environment with a test that is similar to the actual demands of a specific sport.

The following is an exclusive excerpt from the book NSCA’s Guide to Tests and Assessments, part of the NSCA’s Science of Strength and Conditioning Series with Human Kinetics. All text and images provided by Human Kinetics. 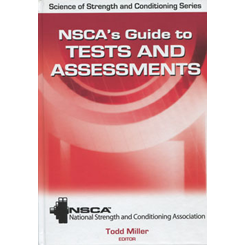 Sport Performance and Speed and Agility

Most sports, even endurance sports, have speed or agility as a component. Except in sports such as track or swimming where there is minimal or no change in direction, speed and agility are both important aspects of sport performance. The most successful American football lineman, for example, is the one who can react most quickly to the snap of the ball and get off the line toward the opposing player the quickest. Similarly, the best soccer or ice hockey players can change direction and take off with the ball or puck the fastest. Assessing speed and agility in a controlled environment with a test that is similar to the actual demands of the sport of interest is therefore highly useful in helping to design training in order to improve sport performance.

One of the most important steps in using performance tests occurs before the subject even reports to the testing area. Test selection is vital because it affects the validity of the results. The first consideration is that the test represent the physiological demands of the sport. Thus, the fitness professional must have an understanding of the basic energy systems and other physiological traits that would affect sport performance, such as body size. Because many sports require a variety of abilities (e.g., speed, agility, power, anaerobic capacity), a battery of tests is often used to address each of the abilities separately.

Biomechanical factors, such as movement pattern specificity, are important to consider when selecting a test; one agility test may be better for ice hockey, and another, for tennis, for example. Training level is also an important consideration. Tests that involve a higher level of skill or fitness may not be appropriate for novice subjects because their poor technique or conditioning could limit their test performance. Similarly, the sex or age of participants has an impact on test selection; some tests would be difficult for females to complete (i.e., a chin-up test), and others may be inappropriate for prepubescent children.

Testing parameters may be modified to mimic sport characteristics. For example, subjects undertaking an agility test for American football can be required to carry the ball during the test. Tests can also be designed to be more specific to a certain sport movement, but the basic principle of validity must be followed to ensure that it measures what it is supposed to.

Tests of speed and agility should be short, usually less than 20 seconds; longer tests may target the wrong energy systems, and fatigue may affect the results. If an agility test course is too complex, for example, subjects won’t be able to build up speed between turns. In any instance, if a test is modified in any way, the published norms are no longer applicable. New norms have to be developed by testing numbers of subjects over time. Table 10.1 provides a summary of speed and agility test characteristics. 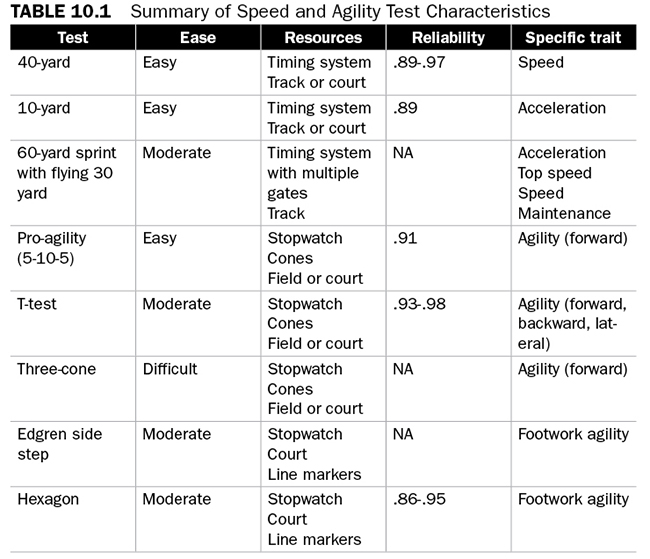 Both speed and closed-skill agility tests require very little equipment. These tests can typically be accomplished with a stopwatch, a tape measure to set the course, and markers of the course, such as cones. Using automated timing devices can increase the accuracy of the tests, but having the same person time each subject may be all that is necessary to ensure reliable results. Open-skill agility tests are more difficult to standardize because the testing environment is unpredictable. Standardization of procedures, such as how many direction changes there will be per test, and fixing the distance to be moved when a directional change is indicated, will increase the test reliability.

The subject should be adequately warmed up before beginning any testing procedure. Although there are no set guidelines for a warm-up, it is generally recommended that subjects first perform three to five minutes of a low-intensity, large-muscle-group activity such as jogging or riding a stationary bicycle to increase circulation to the whole body. Then, more specific warm-up activities can be performed such as executing the movement or test at half or three-quarter speed.

If the participant has range of motion limitations in the lower body, some light dynamic stretching may be recommended so that the appropriate range of motion can be attained for the activity (Bandy, Irion, and Briggler 1998; Hedrick 2000; Mann and Jones 1999). Because other types of stretching, especially static stretching, have been shown to compromise performance in speed, strength, and power activities, the focus should remain on the warm-up and stretching should be minimal prior to performance (Behm, Button, and Butt 2001; Church et al. 2001; Fletcher and Jones 2004; Nelson and Kokkonen 2001; Power et al. 2004; Young and Behm 2003).

For test results to be reliable, many things must be taken into consideration in addition to properly planning for test administration (i.e., training examiners). Factors such as environmental conditions may affect test performance and should be noted, particularly when tests are administered outside where weather (temperature, humidity, precipitation) is variable. Other, more controllable factors include subjects’ hydration and nutritional status. Instructions can be given to subjects regarding water consumption and pretest meals, which can be replicated for repeat test sessions. Dehydration is known to adversely affect performance, and subjects should consume a pretest meal that is well tolerated. Finally, subjects should be well rested following training sessions (at least 48 hours), and should be given adequate rest periods (5 to 20 minutes) between tests when a battery of tests is being performed.

In order to determine a person’s maximum speed, tests of speed should be short (<200 meters) and not involve changes of direction. Additionally, the acceleration phase of movement should be accounted for by setting a test length that allows the subject to attain maximum speed and maintain it for several seconds. Thus, the shortest speed tests are in the 30- to 40-yard range. This method of testing reduces the influence of factors such as fatigue or deceleration and will result in the most accurate determination of speed.

The most common test of speed is the 40-yard sprint. It is used in the NFL Combine, as well as in many collegiate sport programs in the United States. It is also used in laboratory methods classes in exercise science and physical education academic programs. This test is most appropriate for sports that may have an extended run, such as soccer, field hockey, and lacrosse, in addition to American football. It is also short, fast (<7 seconds), and simple to time. This test is also easily modified to shorter and longer distances to be even more specific for sports such as baseball and basketball. Norms for some of these distances are provided in table 10.2. As with all tests of speed, the main objective is to cover the distance as quickly as possible, and usually no more than three attempts are performed to minimize the decline in performance caused by fatigue.

After instructing the subject on the correct performance of the test, follow these steps:
1. The subject lines up behind the start line, facing forward. Sport-specific stances can also be used, such as a three-point stance as in American football (see Figure 1) or a four-point stance as in track (see Figure 2).
2. The subject should be given a countdown, either verbally or, if using timing gates, by using the beeps programmed into the timing gate unit. Alternatively, an electronic switch activated by the subject’s movement can be used.
3. The subject should be allowed two or three trials, with three- to five minute rests between to ensure nearly full recovery.
4. If using a stopwatch, start the watch at the subject’s first movement. Times are typically recorded to the nearest 0.01 second. Hand timing can result in times that are 0.24 second faster (Harman and Garhammer 2008) than the time recorded using a timing gate. Thus, consistency in equipment from test to test and with repeated tests of the same subject is essential.
5. Modifications to the distance can include the 30-yard sprint (basketball) or the 60-yard sprint (baseball), which are more specific to those sports. Any distance can be used, but norms for performance may not be available.

The 40-yard sprint is a highly reliable test with test–retest reliabilities typically above .95, but ranging from .89 to .97.

NSCA’s Guide to Tests and Assessments, published by Human Kinetics, offers extensive information for strength and conditioning professionals on performance-related assessment and testing in measuring key fitness components. The book is available in bookstores everywhere, as well as online at the NSCA Store.