This excerpt will briefly discuss the importance of exercise, dosage of the supplement, efficacy, body mass changes, and adverse effects of creatine.

Creatine is a nitrogenous organic compound that is synthesized naturally in the body, primarily in the liver, and helps to supply energy to all cells in the body. It can also be synthesized in smaller amounts in both the kidneys and pancreas. The amino acids arginine, glycine, and methionine are the precursors for the synthesis of creatine in those organs. Creatine can also be obtained through dietary sources. It is found in relative abundance in both meat and fish. Approximately 98% of creatine is stored within skeletal muscle in either its free form (40%) or its phosphorylated form (60%). Smaller amounts of creatine are also stored in the heart, brain, and testes. Creatine is transported from its site of synthesis to the skeletal muscle via circulation.

Importance of Creatine to Exercise

Creatine, in the form of creatine phosphate (CP; also called phosphocreatine [PCr]), has an essential role in energy metabolism as a substrate for the formation of adenosine triphosphate (ATP) by rephosphorylating adenosine diphosphate (ADP), especially during short-duration, high-intensity exercise. The ability to rapidly rephosphorylate ADP is dependent on the enzyme creatine kinase and the availability of CP within the muscle. As CP stores become depleted, the ability to perform high-intensity exercise declines. In short-duration sprints (e.g., 100 m sprint), the energy for fueling the activity is derived primarily through the hydrolysis of CP (93). However, as high-intensity exercise increases in duration, the ability of CP to serve as an energy source is drastically reduced.

Reports suggest that 37.2% of collegiate athletes use, or have used, creatine during their preparation for competition (90). However, the prevalence of use among strength/power athletes may approach more than 80% in certain sports (154). Creatine use has also gained popularity among high school athletes; 90% of athletes who supplement choose creatine (225). As a result of their widespread use, creatine supplements may be the most extensively studied ergogenic aid in recent history. Creatine supplementation is reported to increase the creatine content of muscles by approximately 20% (40, 78, 132). However, it appears that a saturation limit for creatine exists within muscle. Once creatine concentrations in skeletal muscle reach 150 to 160 mmol/kg dry weight, additional supplementation appears to be unable to further increase muscle creatine concentrations (102). This has important implications for the “more is better” philosophy that governs the thinking of some athletes, and may affect the development of proper and realistic dosing schemes.

A typical creatine supplementation regimen involves a loading dose of 20 to 25 g daily for five days, or 0.3 g/kg body mass if an individual wishes to dose relative to body weight, followed by a maintenance dose of 2 g/day (132). If one ingests creatine without an initial loading dose, muscle creatine content will reach levels similar to those seen in people who do initially use a loading dose, but reaching that muscle creatine concentration will take longer (~30 days vs. 5 days). Muscle creatine levels will remain elevated as long as the maintenance dose is maintained (2 g/day or 0.03 g/kg body mass per day) (132). Once creatine supplementation is stopped, muscle creatine levels will return to baseline levels in approximately four weeks (78, 132).

Most studies examining the effect of creatine supplementation on strength performance have been fairly consistent in showing significant ergogenic benefits (23, 141, 186, 243, 246) (refer to figure 11.4). Strength increases in the bench press, squat, and power clean may be two- to threefold higher in trained athletes supplementing with creatine compared to placebo (122, 186). These results may highlight the benefit of creatine supplementation in experienced resistance-trained athletes whose potential to improve strength may be limited. In experienced strength athletes, supplementing with creatine may also enhance the quality of workouts (less fatigue, enhanced recovery), which may be crucial for providing a greater training stimulus to the muscle. 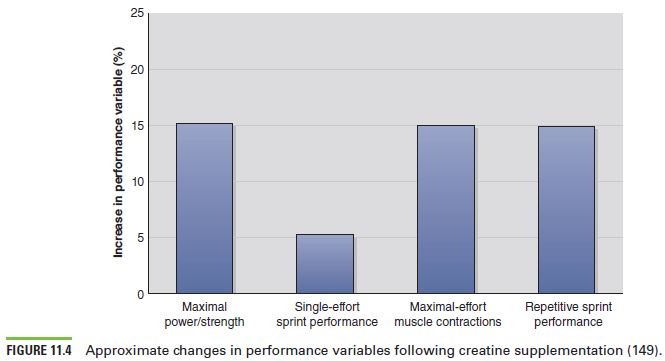 Most studies examining the effects of creatine supplementation on a single bout of explosive exercise (sprint performance) have not shown any significant performance improvements (62, 145, 177, 212). However, in many of these studies, subjects were supplemented with a loading dose for only five days (145, 177, 212). While ingesting creatine with a loading dose for five days will significantly increase intramuscular creatine stores, this is likely not enough time for training adaptations to occur and to be manifested in explosive exercise performance improvements. When subjects have supplemented for an extended period of time (28-84 days), significant improvements in jump and power performance have been seen (108, 243). It appears that creatine is more effective as a training supplement than as a direct performance enhancer.

Prolonged creatine supplementation has been generally associated with increases in body weight. These increases appear to primarily relate to increases in fat-free mass. The increase in body mass is believed to be partly related to an increase in total body water. An increase in creatine content within the muscle is thought to enhance the intracellular osmotic gradient, causing water to fill the cell (244). In addition, increasing the creatine content of muscle appears to be coupled with an increased rate of muscle contractile protein synthesis (246, 255). In general, creatine supplementation during training is typically associated with a 1- to 4.5-pound (0.5-2 kg) greater increase in body mass or fat-free mass (151) over a period of several weeks to several months.

Increase in body mass has at times been referred to as a potential unwanted side effect of creatine supplementation (206), particularly in relation to strength-to-mass or power-to-mass ratio. However, in athletes supplementing with creatine, weight gain is often a desired outcome. When people talk about side effects from a drug or supplement, they are generally referring to a potentially debilitating effect. There have been many anecdotal reports of gastrointestinal, cardiovascular, and muscular problems, including muscle cramps, in association with creatine ingestion. However, controlled studies have been unable to document any significant side effects from creatine supplementation. Even during prolonged supplementation (several weeks up to many months), no increases in reported side effects were noted in subjects supplementing with creatine—either competitive athletes or recreationally trained individuals (60, 103, 151).

Another concern with any supplement is the long-term health effects. A retrospective study on health variables in 26 former or current competitive athletes who had used creatine for up to four years indicated only occasional gastrointestinal upset during the loading phase (206). These disturbances ranged from gas to mild diarrhea. Other hypothesized major concerns during creatine supplementation include a strain on the kidneys due to the high nitrogen content of creatine and increased creatine excretion during short-term ingestion. However, no renal dysfunction has been reported with either short-term (five days) or long-term (up to five years) creatine use (189, 190).

Despite certain media and anecdotal reports linking creatine supplementation to dehydration and cramping, there is no reason to believe that creatine enhances the risk for these side effects.