The following is an exclusive excerpt from the book NSCA’s Guide to Sport and Exercise Nutrition, part of the NSCA’s Science of Strength and Conditioning Series with Human Kinetics. All text and images provided by Human Kinetics. 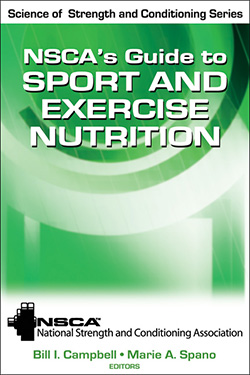 Certain examples suggest how the effects of fat differ between athletes and sedentary healthy persons or patients in clinical settings. For instance, physical training can favorably change the tissue ratios of fatty acids in the body (Andersson et al. 2000; Helge et al. 2001). This beneficial, nondietary shift toward greater omega-3 content is not seen in nonexercisers. In addition, consumption of the lower-fat diet often pursued by athletes favorably changes tissue ratios of fatty acids (Raatz et al. 2001). This is at least in part due to a lower presence of (and thus less competition from) omega-6 fatty acids. Many athletes do not realize they can reduce (improve) their tissue ratios of omega-6 to omega-3 by simply consuming less overall dietary fat.

Extreme diets can become problematic, however. As one example, the “benefits” of very low-fat, high-fiber diets suggested by some researchers induce changes that athletes may want to avoid. For instance, reduced testosterone concentrations (Dorgan et al. 1996; Hamalainen et al. 1983; Reed et al. 1987) from such intakes may be beneficial to a patient with risk of androgen-dependent prostate cancer but may not be beneficial to an athlete who needs the additional 10% to 15% circulating testosterone. Most athletes are aware that testosterone is advantageous for athletic recovery and muscular growth.

Another popular and sometimes extreme dietary recommendation, decreased kilocalorie intake, may also be problematic for athletes. With the often large kilocalorie expenditures of training or the caloric demands of adding lean mass, it would not be advantageous for athletes to restrict the very energy that drives progress. All things considered, fat content of the diet can range from 20% to 40% of total kilocalories with no effect on strength performance (Van Zant, Conway, and Seale 2002).

The longer-term effects of dietary fat on an athlete are not the only consideration; it is important to understand more acute issues as well. Regarding dietary fat as fuel during exercise, two major phenomena are the “metabolic crossover effect” (Table 4.2) and the “duration effect,” or “fat shift” (Table 4.3). The former involves a crossover from fat oxidation at rest and at lower intensities toward carbohydrate usage at high intensities. That is, an inverse relationship exists between direct fat “burning” (measured by respiratory exchange ratio) and exercise intensity (measured via heart rate or V.O2max) (Brooks 1997; Klein, Coyle, and Wolfe 1994; Sidossis et al. 1997). Biochemical control and the immediacy of need for energy are reasons for this crossover. Even highly trained aerobic endurance athletes, with their enhanced capacity to oxidize fat, eventually “cross over” to carbohydrate use, albeit at higher intensities than less aerobically fit persons.

The duration effect, however, involves the opposite relationship. Exercise duration is positively correlated with fat use (Lowery 2004). During prolonged, low-intensity exercise (greater than 30 minutes), the use of carbohydrate to fuel the activity gradually shifts toward an increasing reliance on fat as the fuel. The greater reliance on fat can be demonstrated by measurement of glycerol levels in the blood. Recall that a triglyceride molecule consists of a glycerol molecule and three fatty acids. If fat is going to be used to fuel activity, the triglyceride molecule needs to be broken down (chemists use the term “hydrolysis” to refer to this reaction) into a free glycerol molecule and three free fatty acids. The glycerol and fatty acids are said to be “free” because they are not bound to each other as they were in the triglyceride form. As exercise duration increases, an associated increase of blood glycerol levels occurs (Table 4.3), indicating that triglycerides have been broken down and that the fatty acids are being used to fuel the low-intensity exercise.

Two points about exercise for body fat loss are worth reiterating here. First, not all bodily fat is stored in adipose cells. A significant percentage comes from the roughly 300 g of stored intramuscular triacylglycerol. Research has clarified that these muscle lipid droplets are a portion of the oxidized fat seen with use of metabolic cart systems. Second, the crossover and the duration phenomena do not necessarily suggest that body fat reduction is only achieved directly during fasted, low- to moderate-intensity prolonged exercise. Indeed, repeat bouts of high-intensity exercise stimulate mitochondrial biogenesis that would enhance fat usage throughout an athlete’s day. Further, high-intensity training reduces glycogen stores that would subsequently be refilled by ingested carbohydrate, a nutrient that may otherwise be converted and stored as body fat (these are key reasons many power athletes are so lean). The choice of exercise intensity and duration, then, is partly determined by the athlete’s need for aerobic conditioning versus the need for rest and prevention of (sympathetic type) overtraining. 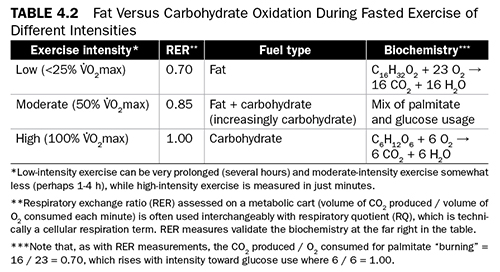 To augment and support the adaptations of physical training, athletes have increasingly sought to manipulate dietary fat. This takes the form of both food manipulation and dietary supplement administration. Food manipulations center around the fact that eating more fat—even “fat loading”—can increase muscle concentrations of stored triacylglycerol and increase the activity of “fat-burning” enzymes. Raising the roughly 300 g of stored intramuscular triacylglycerol would appear advantageous regarding simple fuel supply. A look inside a muscle cell reveals lipid droplets immediately adjacent to the mitochondrial furnaces that drive aerobic endurance performance, leading to interest in increasing these readily accessible depots of fuel. This is especially true given that aerobic endurance athletes have an increased capacity to store these fat droplets compared to nonexercisers (van Loon et al. 2004) (interestingly, cellular fat accumulation is part of the mechanism behind diabetes but in athletes is not deleterious). Eating more dietary fat is not intended simply to increase the content of one’s intramuscular “gas tank,” however. By adapting to a higher-fat diet, an athlete becomes better at using stored fat (Fleming et al. 2003; Zderic et al. 2004). One strategy, then, is to devise a pre-event dietary regimen that allows for one to two weeks of increased lipid storage and (fat oxidative) enzyme enhancement.

Unfortunately, the primary finding of fat loading studies appears to be an increased (rather than decreased) rate of perceived exertion (RPE), with inconsistent or decreased overall performance. Although some studies have suggested a prolonged time to exhaustion after a fat load (which is good), the increased sense of effort coupled with no enhancement of aerobic power (Fleming et al. 2003; Hargreaves, Hawley, and Jeukendrup 2004; Stepto 2002) has led many researchers and coaches to abandon or modify the fat loading strategy. It appears that simply having more intramuscular fat or even enhanced fat oxidation does not equate to better performance in most sports. This has prompted researchers to try fat loading regimens followed by ample pre- and midexercise carbohydrate consumption. Despite showing marked and seemingly favorable changes in fuel metabolism, however, these investigations remain equivocal regarding actual performance (Williams 2005).

NSCA’s Guide to Sport and Exercise Nutrition, published by Human Kinetics, describes how food, sport supplements, and their interactions with a client’s biological systems can enhance exercise and sport performance for optimal training, recovery, and competition. The book is available in bookstores everywhere, as well as online at the NSCA Store.