"Get Up and Go" Drill for Rugby Players

The aim of the get up and go drill for rugby players is to develop the ability to accelerate from a low body position, which is especially important when accelerating into a potential contact situation.

The following is an exclusive excerpt from the book Developing Speed, part of the NSCA’s Science of Strength and Conditioning Series with Human Kinetics. All text and images provided by Human Kinetics.

Implications of Speed in Rugby

Speed is a highly prized asset in rugby and can often differentiate one player from another. Rugby is a collision game, and the generation of momentum is critical to these collisions. Momentum is the product of mass and velocity, so the greater a player’s speed capacity, the greater chance that player has of being successful in collision situations.

Speed is a major asset both offensively and defensively. For example, offensive players with greater speed capacities have a greater range of attacking options, allowing them to create and exploit space. Conversely, defensive players lacking speed have an inherent weakness, as they are less able to close down space to make defensive plays. The development of speed should be a key component of any rugby development program.

Although the following drills improve rugby speed, they should be seen as part of a bigger recipe for success. Speed is dependent on a range of physical abilities, including maximum-force capacity, the rate of force development, and the effectiveness of the stretch-shortening cycle as highlighted in Chapter 1. Therefore, coaches and athletes should supplement this work with a strength and power program to maximize its effectiveness. This section provides three types of drills:

o Get past (defender moving forward)

Get Up and Go

Aim: To develop the ability to accelerate from a low body position, which is especially important when accelerating into a potential contact situation.

Action: The athlete lies prone on the ground (Image a). On a self-start or a signal from the coach, the athlete lifts out of the start position and sprints forward for a given distance, such as 10 yards (Image b). 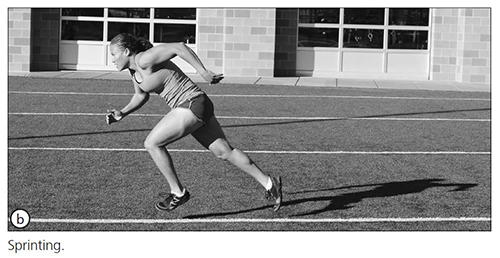 Variation: This drill can be performed in competition against other players. Players line up on a start line, and on a signal from the coach sprint for a given distance, such as 10 yards, and try to get to the finish line first.

With Developing Speed, the National Strength and Conditioning Association (NSCA) has created the definitive resource for developing speed training programs that optimize athletic performance. Including assessments and the application of speed training to eight specific sports, this authoritative guide provides all the tools needed for maximizing speed. The book is available in bookstores everywhere, as well as online at the NSCA Store.