This excerpt from Strength Training describes the hormone response to exercise and their functions within the human body.

As stated previously, the endocrine system releases hormones during and after the production of muscular force. Hormones are only signals, and their messages are realized when they bind with an appropriate receptor that mediates their signal to the target cell’s nuclei. Hormones such as epinephrine help the muscles produce force. Other hormones in the body—such as testosterone, various types of growth hormone (GH), and insulin-like growth factor (IGF)—stimulate muscle protein synthesis by sending signals to produce proteins, regenerate, and grow to the muscle’s genetic machinery in the myonuclei (i.e., nuclei within a muscle; for an overview, see figure 2.7). Resistance exercise naturally (i.e., without the use of drugs) increases the concentrations of anabolic (muscle building) hormones in the blood during exercise and for approximately one hour afterward. This helps signal the body to rebuild and repair body tissue, including muscle. 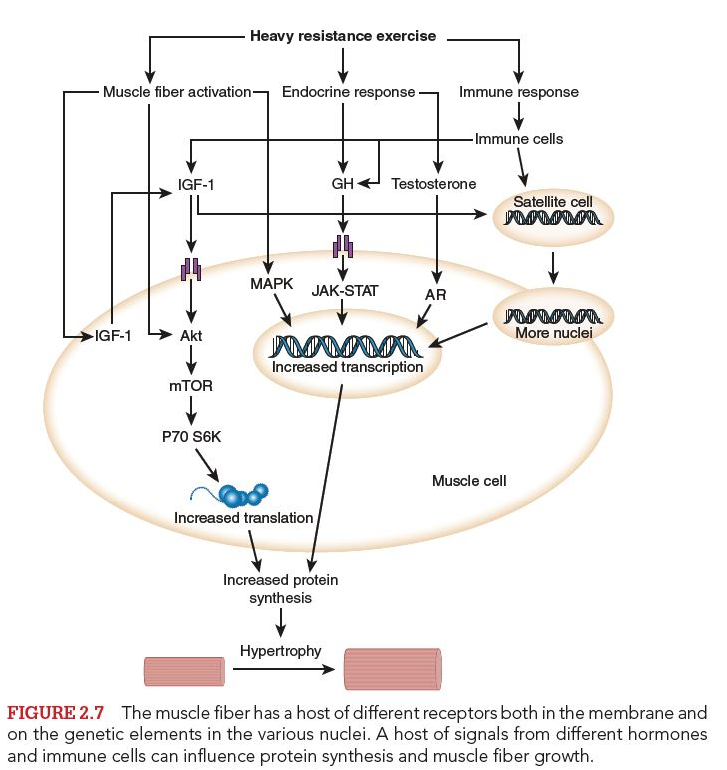 Testosterone, which is produced primarily in the testes in men and in the adrenal glands in women, has a dramatic effect on human physiology, including the growth of tissue (for a review, see Vingren et al. 2010). On reaching the exercising muscle, testosterone passes through the muscle’s membrane and binds to one of many testosterone-specific receptors (known as androgen receptors) inside the muscle cell. Once this binding occurs, testosterone sends a signal to the cell’s nucleus to increase protein synthesis (i.e., make new proteins). Repeated training bouts cause the muscle fiber to increase in size or cause neural cells at the end of the motor neuron at the neuromuscular junction to increase the amount of neurotransmitter (see Kraemer et al. 2016).

Muscular force production also stimulates the release of various types of GH from the pituitary gland (a small gland in the brain). GH is the primary hormone in a superfamily of various types and forms of the primary hormone. The primary GH is a 191 amino acid hormone and in the pituitary there are shorter amino acid variants, aggregates of the GH and binding proteins all with known and unknown biological functions (for a review, see Kraemer et al. 2010). Once released from the pituitary gland, GH then binds to various receptors on the membrane of target cells in the body, stimulating the genetic machinery via intracellular signaling processes (secondary messenger molecules and pathways), which stimulate the genetic machinery in the nuclei of cells. GHs can act directly on skeletal muscle.

IGFs are another superfamily of polypeptides that has evolved as a group of hormones and binding proteins with potent anabolic functions related to growth and health (Nindl and Pierce 2010). GH also travels through the bloodstream and stimulates the production of IGF-1 (IGF-I) in the liver and muscles. IGF-I can then bind to a receptor on the outer membrane of the muscle fiber and send a signal to the muscle cell nucleus to increase the production of proteins.

A critical function of both IGF-I and testosterone is to activate a group of cells called satellite cells, which also contribute to muscle growth. This is discussed in detail later in this chapter.

The hormonal response to exercise is part of an integrated physiological pattern of response to an exercise stimulus created by proper program design. Over time, the hormonal response can contribute to the increase in muscle size (for a review, see Kraemer et al. 2016). Appropriately structuring a resistance training program can minimize catabolic responses and optimize anabolic hormone signaling. In general, the hormonal response to exercise is greatest when using high exercise volume (3 or 4 sets of 6-12 repetitions for each exercise), heavy loads (>80 percent of maximal strength), short rest periods (one to two minutes between sets), and exercises that target large muscle mass (squats, deadlifts, power cleans, and so forth). However, individuals must take care to not overshoot the tolerance for total work and short-rest workouts, which can promote chronic increases in cortisol. Long-term elevations in cortisol can promote a catabolic state in the body. Proper rest and periodization of the training program can minimize such negative effects. As noted previously, periodizing different volumes of work and different lengths of rest is important for optimizing recovery. (For a review of the hormonal responses and adaptations to resistance exercise, see Kraemer and Ratamess 2005; Fleck and Kraemer 2014.) The hormonal response to exercise generally is correlated with the amount of metabolic stress—that is, the higher the metabolic stress, the higher the hormonal response.

A clever experiment performed by a group of scientists in Denmark (Hansen et al. 2001) demonstrated the significance of the relationship between an increase in the anabolic hormones circulating in the bloodstream and gains in muscle strength. The scientists tested the arm strength of a group of subjects and subsequently divided the subjects into two groups. One group trained only their arms (A group), and the other group trained their arms and their legs (AL group). Both groups spent the same amount of time training their arms; however, the AL group performed additional leg exercises to increase the concentration of circulating anabolic hormones—that is, testosterone and GH. (As already mentioned, the amount of these anabolic hormones in the blood will increase more if a large amount of muscle is exercised.) At the end of the experiment, the scientists found that the A group increased their arm strength by 9 percent, whereas the AL group increased their arm strength by 37 percent! This concept was validated later in a study from a group of scientists in Norway (Rønnestad et al. 2011), who demonstrated that elevations in GH and testosterone produce superior strength training gains. These studies clearly show the importance of recruiting a large muscle mass during resistance exercise; doing so causes a large increase in anabolic hormones and a greater increase in strength and muscle size.

The popularity of endurance sports continues to grow worldwide. Now, from the National Strength and Conditioning Association (NSCA) comes Strength Training, Second Edition, the definitive resource for developing the endurance training programs that maximize performance and minimize injuries. The book is available in bookstores everywhere, as well as online at the NSCA Store.