Ice hockey is an invasion sport, where one team is trying to invade another team’s territory (8). Ice hockey is played on skates on ice for three 20-minute periods. The 60-minute game is played five-on-five in a confined space. Because the playing area of the ice is relatively small, agility becomes a crit­ical skill (4).

A typical game is very dynamic and involves exposure to intermittent high-intensity activity, typically in 30-second shifts. Both high-velocity colli­sions and unpredicted COD are common (5). In addition to reacting to other players, athletes must also be able to react to the unpredictability of the puck. This demand for agility requires the athlete to be able not only to accelerate and decelerate repeatedly but also to change direction intermittently while remaining in motion (3, 5).

Since ice hockey is played on a different surface, training that takes place on a field is often referred to as dry-land or off-ice training. Implementing agility drills in the dry-land or off-ice setting first and then moving to on-ice training is a typical and proper progression. Drills are performed in this sequence to ensure that the movement techniques are refined and then transferred, based on the performance demands of the sport. On-ice agility drills are often reserved for in-season training because of the cost of ice time. Proper progression of agility drills involves starting with closed agility, ensuring proper body mechanics and tactical execution. Once the foundation of closed agility skills is established, progression to open agility can begin. After advancing to open agility, adding a cognitive component can increase the difficulty of the drill.

Reactive agility requires decision-making (9). Athletes are often required to assess the situation, process the information, decide what to do, then execute the appropriate action or actions. This process can be described simply as perceive, process, and react. Both the perceptual and decision-making components of agility are trainable and should be incorporated into agility training programs (6). Incorporating cognitive aspects into the training drills will help develop the ability to perceive, process, and react and perform agility movements in a game-specific context.

Both open and closed agility drills can become advanced drills by simply adding a cognitive aspect to the drill. Having the athlete perform a simple math calculation while performing an agility drill will increase the workload. If the coach makes the answer become a stimulus for another movement aspect of the drill, the workload increases further. 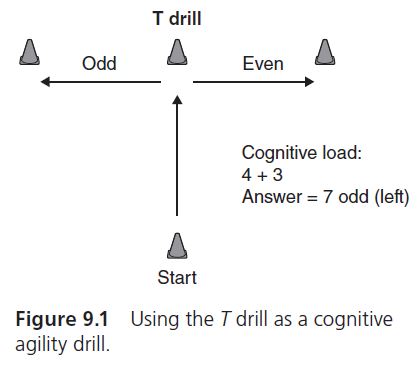 Reactive agility incorporates some type of stimulus that results in a COD or a change of technical skill such as sprinting, lateral shuffling, or backpedaling. This can be auditory, such as a whistle or a voice command, or visual, such as a movement of a person (figure 9.2). 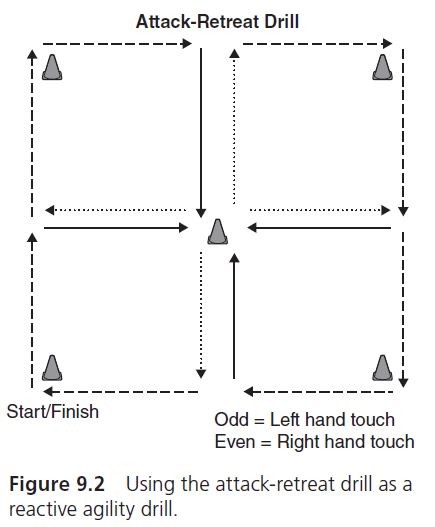 In Developing Agility and Quickness, leading experts from the National Strength and Conditioning Association (NSCA) offer more than 130 drills, 12 agility and quickness tests, and 15 sport-specific training plans to help athletes gain a step on the competition. The book is available in bookstores everywhere, as well as online at the NSCA Store.