by NSCA's Guide to Tests and Assessments
Kinetic Select January 2020

This excerpt from NSCA's Guide to Tests and Assessments briefly discusses the method behind a lactate threshold test and the pretest considerations one might take prior to this test.

During a lactate threshold test, subjects exercise at progressively higher work rates until they are at or near exhaustion. Blood samples are taken at regular time intervals throughout the test and analyzed for lactate concentration. The test begins at a relatively low work rate and progresses slowly so that blood lactate levels remain at, or near, resting levels throughout the early stages of the test. The work rate increases such that a lactate threshold is reached after approximately 12 to 20 minutes of exercise. This strategy of gradually increasing the workload from a low-intensity starting point establishes an exercising baseline level of blood lactate that is useful in identifying the point at which blood lactate accumulation begins.

A variety of exercising modes can be used to perform a lactate threshold test; treadmill running and cycling ergometry are two of the most popular. Although practically any exercise mode is suitable for testing non-endurance-trained athletes, endurance-trained athletes should be tested using the type of exercise that most closely resembles their competitive events. This strategy allows the athlete to perform the test using a familiar mode of exercise and provides data that are useful in both the design and the assessment of a training program. 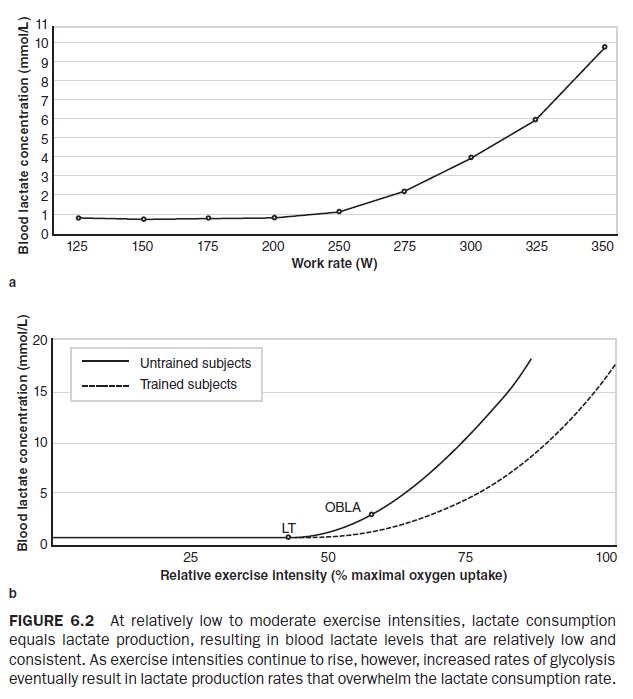 Developed by the National Strength and Conditioning Association (NSCA), this comprehensive text offers extensive information on performance-related assessment and testing for strength and conditioning professionals in measuring key fitness components. The book is available in bookstores everywhere, as well as online at the NSCA Store.