by Strength Training
Kinetic Select May 2022

This excerpt from Strength Training, Second Edition briefly details hormones and their role in the human body.

Nearly every physiological function in the body is regulated by hormones—chemical messengers that travel via the bloodstream to target tissues in the body (e.g., muscle). Figure 4.1 provides an overview of the roles that hormones play. Because resistance exercise dramatically affects hormonal responses in the body and in part stimulates the development of tissues (including muscle and bone), you need to understand how the food you eat affects these hormones. Hormones play a significant role in metabolic balance. They largely are responsible for the fuel selection, partitioning of nutrients, and gene regulation that ultimately affect body composition and muscle mass. 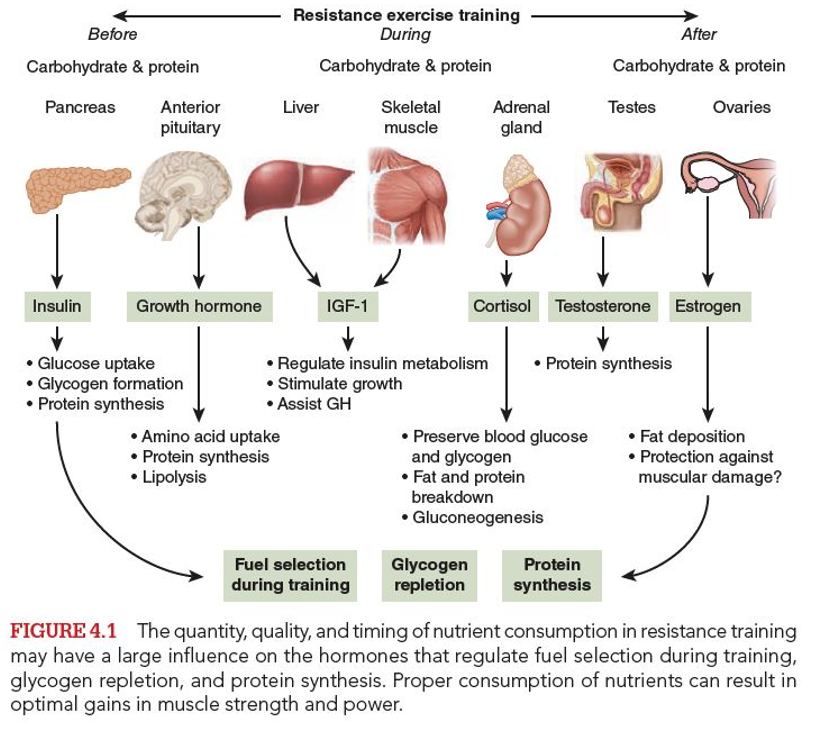 As you learned in chapter 2, an acute bout of resistance exercise (considering the load, number of sets, number of repetitions, and number and length of rest intervals) creates a stimulus that generates a hormonal response. Muscle actions trigger a series of mechanical and chemical events in the muscle that signal hormones to regulate enzymes, which in turn regulate the genetic formation of proteins. For anabolic actions, just the muscle fibers that are activated as part of the motor unit used to perform the exercise will be affected. Conversely, catabolic factors (e.g., reactive oxygen species, cortisol, and so on) can target all muscle fibers. Some nutrients, such as the branched-chain amino acid leucine, can stimulate protein synthesis directly in muscle. Exercise increases blood flow and thus increases the delivery of hormones and nutrients to the target receptors on and in the muscle cells. The anabolic environment is enhanced by the exercise stimuli along with the availability of nutrients and hormones. Consumption of carbohydrate and protein appears to affect the responses of hormones involved in muscle metabolism—including insulin, testosterone, growth hormone, cortisol, estrogen, and insulin-like growth factor-1—thus affecting muscle protein and glycogen balance. Although the role of insulin in response to exercise and diet is understood, the influence of the other hormones listed remains unclear. Metabolic context is the important factor related to the role of certain hormones and their effects.

Insulin is released from the pancreas in response to high concentrations of circulating blood glucose. This hormone promotes glucose and amino acid uptake by the tissues, glycogen formation, and protein synthesis in the presence of sufficient amino acids. Its importance as a trigger for protein synthesis remains under study and most likely is related to overall dietary practices (e.g., high- or low-carbohydrate diets).

Growth hormone (GH) is group of polypeptide hormones made up of the primary monomer (191 amino acids) and aggregates of it. GHs of different sizes are secreted from the anterior pituitary gland (located at the base of the brain) in response to exercise, sleep, stress, and low plasma glucose. Different isoforms function metabolically to cause the muscle cells to take up amino acids, leading to an increase in protein synthesis, lipolysis (fat metabolism), and glucose conservation. This ultimately contributes to anabolic processing in the body, although connective tissue may be targeted more than muscle. The larger aggregates of GH, called the bioactive forms, make up the greatest amount of GH in the blood (Nindl et al. 2003; Kraemer et al. 2010; see figure 4.2). Thus, one must view GH as a much more complex superfamily that includes binding proteins to which the GH forms attach. An increased amount of GH is released in response to exercise, likely contributing to metabolic fuel adaptations during exercise and tissue repair after exercise. However, GH concentrations decrease in response to increased blood glucose from carbohydrate consumption. Conversely, GH concentrations increase in response to the hypoglycemia (low blood glucose levels) created after the body cells take up glucose from the blood in the hours after carbohydrate ingestion. Furthermore, circulating fatty acids inhibit GH secretion. An increased amount of GH is released in response to greater activation of anaerobic glycolysis and lactate formation. In both men and women, GH concentrations are elevated in the 30 minutes after resistance training. 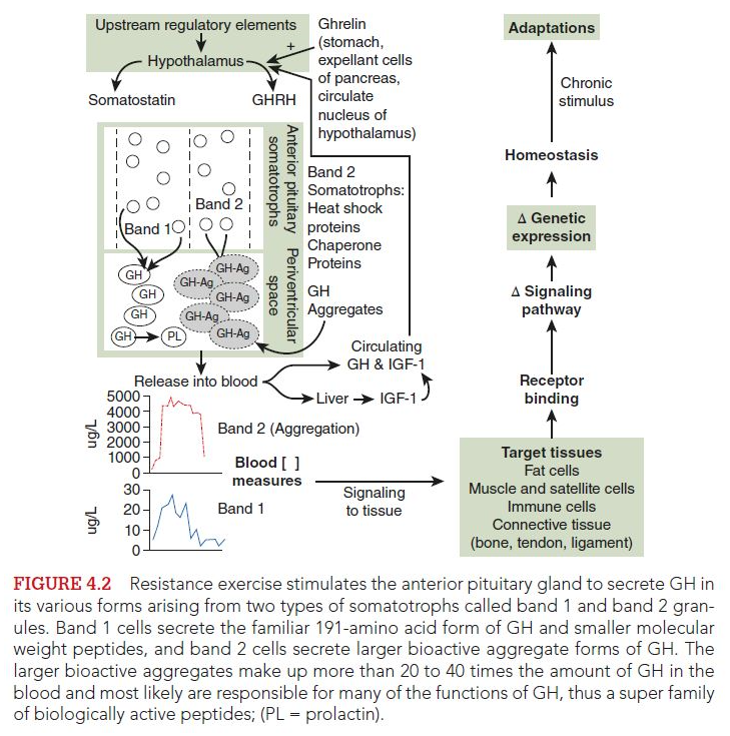 Insulin-like growth factor (IGF) is an anabolic hormone and a group of binding proteins produced in the liver and skeletal muscle that mediate different anabolic functions and metabolic reactions. GH can stimulate the production of IGFs in the liver (Matheny et al. 2010; Nindl and Pierce 2010). IGFs stimulate the growth of most body tissues, including skeletal muscle, and concentrations are substantially increased in response to progressive overload resistance exercise. IGF-1 (IGF-I) does not appear to be immediately affected by metabolic stressors of glucose and insulin (i.e., exercise and feeding), but it does appear to regulate glucose during the fasted state.

Testosterone is an anabolic (tissue building) and androgenic (responsible for masculine characteristics) hormone produced primarily in the male testes but also in the adrenal glands in both men and women. It is the most anabolic stimuli in men and is present in much larger quantities in men than in women. Decreases in testosterone with feeding or after initial increases with resistance exercise represent an increased uptake of testosterone by the androgen receptors. With increased androgen binding, anabolic signaling occurs. These androgen receptors are located on the DNA in the nuclei of the muscle and other cells (e.g., neurons) that mediate the anabolic signals of testosterone (Vingren et al. 2010). When testosterone binding is inhibited, the development of muscle size and strength is compromised even though other anabolic signaling mechanisms are operational (Kvorning et al. 2006a and b, 2007).

Estrogen is a sex hormone produced primarily in the ovaries in females (males produce small amounts of estrogen in the testes) and is responsible for fat deposition and female sex characteristics. Although estrogen rarely is considered an important hormone for muscular development and strength, understanding the role estrogen plays in energy metabolism and protein synthesis is critical to the female athlete. Many researchers avoid studying female athletes because controlling or accounting for these athletes’ monthly fluctuations in hormone is difficult, and animal models are used in many studies of female hormones and muscle metabolism. Nevertheless, researchers recently have recognized that estrogen has a potential protective effect against skeletal muscle damage, which may have important consequences for female muscular responses to resistance training. Females have been shown to have lower blood concentrations of creatine kinase (a marker of muscle damage) compared with males, suggesting that female muscle may sustain less damage from resistance exercise. The mechanisms for this protective effect are not completely understood, but estrogen may play an antioxidant role or a role in the inflammatory response. Some evidence in vitro and in rats indicates that ovarian hormones inhibit muscle protein synthesis. How these findings apply to humans and how they affect nutritional considerations for the female strength athlete are unclear.

Cortisol is a steroid hormone (i.e., it can pass through a cell membrane without a receptor to reach the nucleus) produced in the adrenal glands above the kidneys in response to exercise, injury, or stress. Cortisol preserves blood glucose and glycogen concentrations by increasing fat and protein breakdown in the liver, which fuels the production of new glucose (gluconeogenesis). Cortisol also breaks down proteins (by inhibiting protein synthesis) to form amino acids that can be taken up by the liver, stimulating the mobilization of free fatty acids from adipose (fat) tissue. This then stimulates the liver enzymes for glucose synthesis and blocks the entry of glucose into tissues, encouraging those tissues to use fatty acids as fuel. Because cortisol is related to an increased rate of protein catabolism, it has an inhibiting effect on skeletal muscle hypertrophy. Cortisol concentrations fluctuate regularly throughout the day and are significantly increased during an acute bout of resistance exercise in both men and women. Protein appears to have the greatest stimulatory effect on cortisol levels. Cortisol causes immune cells to be nonfunctional due to their use of glucose as a primary energy source (Fragala et al. 2011) and blocks molecular signaling systems in muscle (Spiering et al. 2008a). High concentrations of resting cortisol are associated with sequences of training and lack of recovery. Cortisol plays a catabolic role due to its effects on protein metabolism and competitive binding on parts of the upstream regulatory receptor for testosterone on the DNA in the nuclei of cells. With acute resistance exercise, cortisol receptors in the activated skeletal muscles with resistance exercise do not change within men (Vingren et al. 2009).

The popularity of endurance sports continues to grow worldwide. Now, from the National Strength and Conditioning Association (NSCA) comes the definitive resource for developing the endurance training programs that maximize performance and minimize injuries. The book is available in bookstores everywhere, as well as online at the NSCA Store.