by NSCA's Guide to Program Design
Kinetic Select May 2017

This article contains examples of how to periodize training programs to help aerobic endurance athletes reach their peak condition at the appropriate time of the year.

Similar to that for strength/power athletes, the training program for athletes participating in an aerobic endurance sport is periodized to help them reach peak condition at the appropriate time of the year. One of the largest differences between these two types of athletes is that the majority of strength/ power athletes participating in a team sport focus on a competitive season in which importance is placed on all contests. In contrast, aerobic endurance athletes, although participating in several meets during the season, are preparing to peak at a specific contest at the end of the competitive season.

These athletes actually train through the earlier contests in order to reach peak performance for the more important contests that occur at the end of the season. Another difference between the two types of athletes is that aerobic endurance athletes generally do not perform speed or agility training. However, some may use resistance training to support specific goals (see chapter 4). The following sections discuss specific training strategies for aerobic endurance events. In addition, examples of training programs are provided.

The marathon distance is becoming more and more popular for recreational runners. Once thought of as a race for only serious runners, the distance offers a challenge that is now appealing and, with proper training, feasible for many runners. Many websites offer free training plans for the marathon that allow athletes to modify volume and intensity based on current race time, number of weeks before the event, and current fitness level. If their goal is not just to finish a marathon, but rather to improve performance time, athletes might consider adding a tempo or hill workout each week. Table 12.16 shows a 16-week marathon training program for a beginner. A more advanced runner might use a program more like that shown in table 12.17. 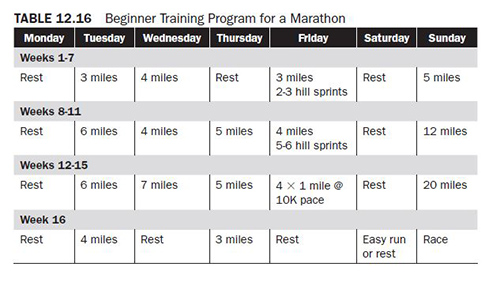 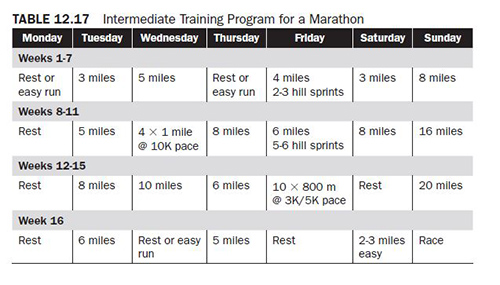 Training for a half marathon calls for reduced volume, specifically by reducing the training day for long, slow distance (LSD) work, and perhaps by adding an additional speed session each week. Athletes may also increase the intensity of existing speed sessions. Training for an ultra-endurance run requires more volume and less intensity over a longer training period.

Triathlon training can cross a wide spectrum of training areas, depending on the distance of competition. In all cases, training strategies include a variety of swim, bike, and running workouts that use all the concepts covered in this chapter: LSD, intervals, Fartlek training, and, of course, recovery. Several helpful websites are available to help establish specific programs. Table 12.18 provides a sample two-week triathlon training cycle. 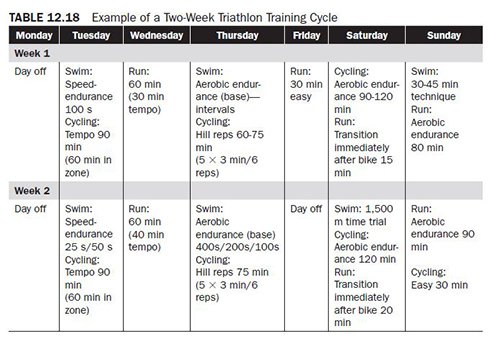 A benefit of the 5K distance is that almost anyone, at any fitness level, can train to run a 5K in as little as six to eight weeks. Training for a 5K consists of less volume and more intensity than that required for longer aerobic endurance events. Table 12.19 is a sample 5K training plan for an intermediate runner.

Training for a 10K requires more volume than the 5K because of the increased length of the race. Intermediate runners should perform one or two training runs per week that are longer than the race distance. For beginners, longer training runs may not be as necessary if their primary goal is just to finish the race. When completing speed workouts geared towards a specific distance, the goal should be to have the distance of the speed workout eventually equal the race distance (e.g., when training for a 5K, 12 3 400 m nearly equals a 5K). It’s important to gradually work up to this volume of speed work to avoid injury.

Developed by the National Strength and Conditioning Association (NSCA), this text offers strength and conditioning professionals a scientific basis for developing training programs for specific athletes at specific times of year. The book is available in bookstores everywhere, as well as online at the NSCA Store