This book excerpt from Developing Agility and Quickness describes the windows of opportunity in youth athletes to time progressions in speed and agility training with their biological and chronological development.

There are two major windows of opportunity, or critical periods of accelerated adaptation, in which the development of speed and agility are critical in a child’s life (2, 21) (table 4.1). While these skills are trainable throughout childhood, the windows of opportunity are considered a prime time for children to be exposed to proper movement mechanics. This first window of accelerated adaption occurs prior to PHV between the ages of 6 to 8 years in girls and 7 to 9 years in boys (2). This period is characterized by an increase in rate of sprint speed and explosive strength improvement (44). Therefore, this critical period is where speed responses will be maximized (2). For accelerated improvement of their motor abilities, prepubescent children may benefit most from training that requires high levels of neural activation, such as plyometrics and sprint training (21, 44). While improvement in speed has been observed prior to PHV (24, 44) declines in performance have been demonstrated during and following PHV (24). Speed and agility, therefore, should be of primary emphasis prior to PHV throughout this first window of opportunity.

The second window of opportunity occurs approximately 12 to 18 months following PHV and often coincides with peak weight velocity (PWV) (5, 6). The PWV is associated with a rapid growth in body mass and usually occurs during the PHV in boys (~14 years) and about 6 months after PHV in girls (~12.5 years) (36). During this time, adolescents undergo periods of rapid gains in muscle mass ensuing from increased circulating androgen concen¬trations (44). Increases in muscle mass, resulting from larger muscle fibers, allow for a greater force-production capacity, leading to increased strength (30). Muscular strength has been closely associated with running speed (13, 14), change of direction speed (29, 39), and plyometric ability (27), such that 70% of the variability in motor skills may be attributed to differences in muscular strength (40). Since strength is the foundation of subsequent power and speed, increases in strength during this stage will assist youth in further advancements in their speed and agility performance. The increases in androgen concentration and lean muscle will increase muscle force and rate of force development, further enhancing change of direction (COD) agility. Therefore, the second window is another critical time to emphasize speed and agility training in youth programs.

Several perceptual variables may influence agility, such as visual scanning, knowledge of situation, pattern recognition, and anticipatory qualities (37). Research suggests that cognitive capacities increase during late childhood (girls: 8-9 years; boys: 10-11 years) and adolescence (girls: ~12 years; boys: ~14 years) (8, 10, 33), and so repeated exposure to speed and agility drills throughout this time may result in faster response times (1). However, during a growth spurt, increased limb length can result in decrements in motor con¬trol performance, a concept commonly referred to as adolescent awkwardness (21). During this stage of development, many of the skills learned previously will need to be reemphasized (21). Therefore, agility should be introduced early in the prepubertal years and continuously progressed and reinforced as the child ages through adolescence. Monitoring growth rates may help coaches identify adolescent awkwardness and adjust the content of training sessions accordingly.

In Developing Agility and Quickness, Second Edition, leading experts from the NSCA offer more than 130 drills, 12 agility and quickness tests, and 15 sport-specific training plans to help athletes gain a step on the competition. 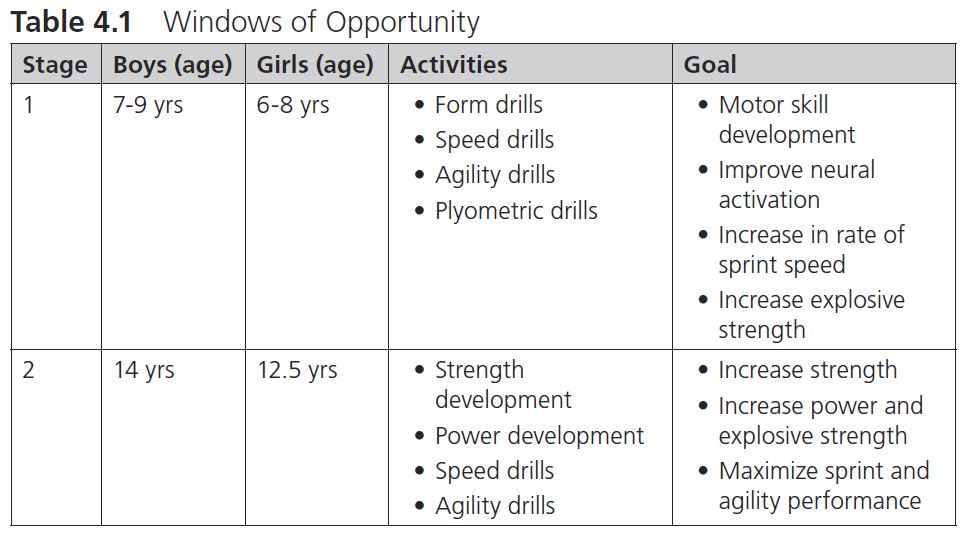 In Developing Agility and Quickness, Second Edition, leading experts from the National Strength and Conditioning Association (NSCA) offer more than 130 drills, 12 agility and quickness tests, and 15 sport-specific training plans to help athletes gain a step on the competition.

The book is available in bookstores everywhere, as well as online at the NSCA Store.