by Developing Agility and Quickness
Kinetic Select May 2017

This book excerpt provides examples of quickness drills that may improve the ability to identify a specific stimulus and to respond quickly and appropriately. 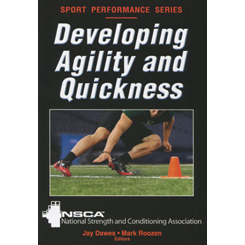 This section provides examples of quickness drills that improve the ability to identify a specific stimulus and to respond appropriately. Athletes must integrate a variety of auditory, visual, and sensory cues in order to execute each drill effectively. Once athletes consistently demonstrate good body control and technique, they can use these drills in a comprehensive agility-training program to improve reaction. This sort of program helps athletes quickly perform sport-specific tasks during competition.

To ensure that the athlete does not anticipate a specific gear, the coach should call out signals randomly. They should mix it up instead of repeatedly progressing through gears 1, 2, and 3 in order. For example, they might go from gear 1 to 3, followed by 2, or from 2 to 1 to 3. This keeps the drill unpredictable, forcing the athlete to focus intently on the auditory cues.

This drill improves the ability to accelerate and decelerate while running forward and backward, such as when covering an opponent in a variety of sports. Begin this drill by placing two cones 10 yards (9 m) apart. The athlete begins by standing in an athletic position at cone 1. On the go signal, the athlete runs forward toward cone 2. When the coach says switch, the athlete immediately decelerates and changes directions, backpedaling to cone 1.

Identifying visual signals from a teammate or coach during competition is an important skill. This drill enhances reactive quickness with visual cues. Two cones are placed 10 yards (9 m) apart. The athlete should stand in an athletic position at cone 1, and the coach should stand just behind cone 2. On the go command, the athlete begins chopping the feet and watching for the coach to give a visual signal for a directional change. To signal the athlete to run forward, the coach raises both arms overhead.

This drill improves lateral movement transitions and hand-eye coordination. Two cones are set up about 5 yards (5 m) apart. The athlete stands between the cones. The coach stands in front of the athlete and throws a ball toward either cone. The athlete must shuffle to the side to catch the ball and then toss it back. As the athlete’s reaction time and movement patterns improve, the coach may increase the distance between the cones or the speed of the throw.

This drill is excellent for improving response to visual stimulus and first-step quickness. The athlete and coach stand approximately 5 yards (5 m) away from each other. The coach has a racquetball (or any ball that bounces). The athlete assumes an athletic position. The coach holds the ball out to the side at shoulder height and then randomly drops it.

As soon as the coach releases the ball, the athlete sprints toward it and catches it before it bounces twice (see photo). The athlete should catch the ball in a good athletic stance. The athlete may not dive for the ball to make up for poor reaction time.

The coach and athlete can use the following variations to make the drill more challenging:
• Increase the distance between the athlete and the coach.
• Have the athlete start from different stances (three-point stance, on a knee, on the belly, and so on).
• The coach holds a ball on each side and drops only one. This requires the athlete to be aware of multiple focal points.
• The coach holds two balls and assigns a number to each (or uses different colored balls). Then, the coach drops both simultaneously while calling out a number (or color) to indicate which ball the athlete should attempt to catch.

From the National Strength and Conditioning Association (NSCA) comes this resource packed with more than 100 drills to help in the development of agility and quickness training programs. Applicable to almost every sport, Developing Agility and Quickness focuses on improving athletes’ fleetness of foot, change-of-direction speed, and reaction time. The book is available in bookstores everywhere, as well as online at the NSCA Store.