This excerpt breaks down the optimal positions of the body during acceleration and deceleration.

Acceleration from an in-place (static) or an in-motion (rolling) start is essential in sport. A key to acceleration while running forward is the triple extension position, which is characterized by a coordinated and powerful extension of the ankle, knee, and hip (2). This powerful movement allows an athlete to propel the body rapidly forward by creating significant ground reaction forces (GRF). Based on Newton’s third law of motion (for every action there is an equal and opposite reaction), the more GRF the athlete is able to produce in the limited amount of time the foot is in contact with the ground, the faster he or she should be able to propel the body in the intended direction. The same holds true when looking at COD or lateral-movement training.

When decelerating the body, or braking, the triple flexion position is used to reduce speed and prepare for the COD. This position is characterized by flexion of the ankles, knees, and hips. In this case, the greater the braking force the athlete is able to create, the quicker he or she will be able to slow down and reposition the body to prepare for the next movement required.

When coaching COD speed or agility drills, several key points should be emphasized (1, 2).

During acceleration, the athlete’s center of mass should be in front of the base of support (i.e., the feet). This allows optimal body positioning for the production of GRF to increase horizontal propulsion. This lean should not be achieved by flexing at the waist; instead, the coach should be able to observe an imaginary line intersecting the ears, down through the torso, hip, knee, and ankle of the supporting leg when the athlete’s knee is fully extended just before the foot loses contact with the ground. The athlete’s head should be in line with the torso and the torso in line with the legs during linear acceleration movements (figure 6.1). 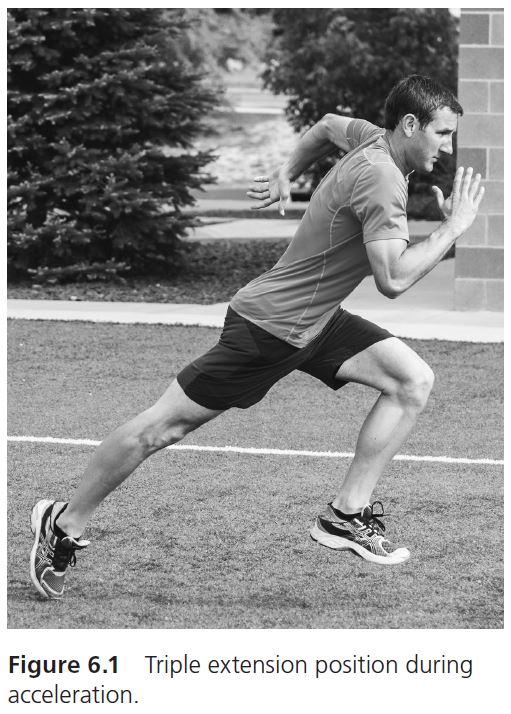 When decelerating, or braking, the forward lean seen during forward acceleration is not evident. This is because, in order to decrease the body’s momentum, the torso must assume a more erect posture compared to the lower body and greater posterior lean during deceleration. This action of the torso moves the center of mass behind to the base of support. This allows the lower body to get into a better position to brake the horizontal propulsion created during acceleration (figure 6.2). 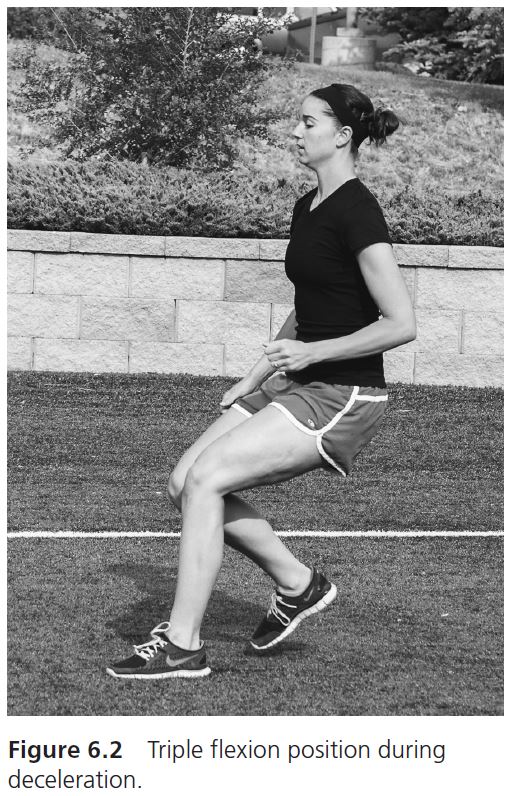 The athlete should be instructed to run with the arms flexed at approximately 90 degrees when accelerating. However, it should be noted that during the backswing the athlete’s elbow will likely extend beyond 90 degrees due to the forces produced from the powerful backward swinging of the arms. This forceful backward swinging of the arms uses the stretch reflex and provides much of the power needed to propel the body. The hands should not cross the midline of the body in order to help counteract the rotational forces of the lower extremities. In general terms, the longer an athlete’s stride length the larger the arm swing will be because arm speed and leg speed are dependent on one another. In other words, as arm swing increases so will stride length (and vice versa).

When decelerating, the arms will continue to move primarily in the sagittal plane (i.e., swing forward and backward), although the range of motion at the shoulder and the amplitude of the arm swing will be reduced when shorter strides are used to slow the body down or to prepare for a change of direction. When moving laterally or into the athletic position, the arms should be at the sides of the body.

Explosive takeoffs require extending the hip, knee, and ankle in a synchronized manner to generate GRFs. When performing acceleration drills, athletes should be instructed to keep their ankle in a dorsiflexed position and use a punch-and-drive action (i.e., punch the knee and drive the foot into the ground). During footstrike, the athlete’s weight should be on the ball of the foot. This action will minimize braking forces and maximize propulsive force. The angle of the athlete’s shins to the ground will be acute (less than 90 degrees) initially and will increase slightly with each successive stride. During acceleration, stride length will start out short; the longer the athlete accelerates, stride length will gradually increase. Ground contact time will be the greatest with the first stride and will also gradually decrease as stride length increases. Similarly, stride frequency will start out slowly because of the initial longer ground contact times required to overcome inertia, and will increase gradually with each stride.

During deceleration the opposite occurs; the athlete’s weight should be more toward the heel at footstrike to reduce propulsive force and maximize braking forces. The angle of the athlete’s shins to the ground will be greater than 90 degrees initially and will decrease slightly with each successive stride. Ground contact time will also gradually increase as the athlete attempts to slow down and prepare to assume a preparatory stance or transition into another movement, such as a lateral shuffle, backpedal, or cut.

In Developing Agility and Quickness, Second Edition, leading experts from the NSCA offer more than 130 drills, 12 agility and quickness tests, and 15 sport-specific training plans to help athletes gain a step on the competition. The book is available in bookstores everywhere, as well as online at the NSCA Store.