This excerpt from Developing Agility and Quickness explains the agility considerations for different wrestling disciplines.

Wrestling is arguably one of the oldest known sports (3). Aside from technique, wrestling requires high amounts of mental drive, stamina, physical strength, flexibility, conditioning, speed, quickness, and agility. It is important to understand the differences in wrestling styles. International styles of wrestling include freestyle and Greco-Roman. Freestyle is similar in many aspects to what the United States knows as high school and collegiate wrestling, with some subtle variations. While Greco-Roman wrestling does not allow any contact with the legs at all, creating a very different requirement for technique and training, freestyle, collegiate, and folk style (high school) allow the participant to touch the legs, thus creating more options to score points. It is important to understand the differences in wrestling disciplines, as the agility considerations can be a bit different at the elite level.

Familiarizing themselves with each style of wrestling allows coaches to program more effectively for those disciplines. Almost all disciplines of wrestling at every level compete for 6 minutes total. In tournament competition the wrestler may have a maximum recovery time of just 10 minutes between wrestling matches.

Wrestling is a very demanding sport that places a large emphasis on the anaerobic energy system (3). Currently, there is no research that has investigated the average distances traveled during a wrestling match. However, a coach may be able to project (to a degree) how far the wrestler will need to travel during a match based on the size (28 feet [8.5 m] in diameter) of the wrestling mat. As the coach selects drills to enhance agility and quickness, he or she can modify those drills based on the defined space of the wrestling mat to develop spatial awareness for the athlete.

For agility and quickness training, athletes should perform no more than five different drills that emphasize COD speed (specific to wrestling) (2, 5). These drills should be performed in rotation anywhere from two to three days per week, depending on the competitive season (2). Athletes should cycle through a variety of drills to reduce the monotony of training and to move the body in multiple directions. Coaches can program these drills with a set pattern or as reaction drills, in which wrestlers respond to a visual cue. The athletes’ focus during these drills should be on the quality of repetitions, not the quantity. Coaches should terminate the drill when the athletes’ exercise technique is compromised due to fatigue. Many of the agility and quickness drills from chapters 6 and 7 can be used in wrestling training programs. Line, dot, and ladder drills are particularly useful for developing footwork patterns and quick feet. Drills that require quick forward, backward, and lateral movements are beneficial for teaching proper body position, awareness, and control. Additionally, many of the cone drills featured in chapter 6 can easily be adapted for the wrestler by simply altering the distances used so they can be performed on a mat, or adding basic wrestling moves at each cone (e.g., shooting, knee slide, sprawl). The following are just a few examples of drills that are useful for wrestlers.

This drill is great for developing explosiveness, foot speed, balance, quickness, and agility, which are all needed during a match. It also improves the ability to accelerate, decelerate, and perform movements in all directions. Ten cones are set up 3 feet (0.9 m) apart in a straight line. The athlete begins in an athletic position to the left side of cone 1, sprints to a point just past cone 2, then breaks down and shuffles to the right just past cone 2, backpedals to just behind cone 2, and then shuffles back to the left of cone 2 as shown in the figure. From there, the athlete sprints to cone 3 and then repeats the same pattern at this cone and at each of the remaining cones in the line. After completing this run, the athlete should rest one minute before the next attempt. The athlete will then repeat this drill, this time beginning to the right of cone 1. During the drill, the athlete’s hips must stay low during each COD; the goal is to maintain balance and body control at all times. The body should not lean backward during the backpedaling or too far to the side during the shuffling. 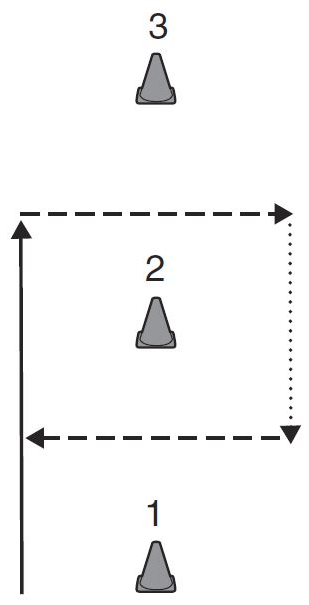 GET UP AND GO

In most matches, wrestlers find themselves on the mat on their back, side, or abdomen. The ability to recover quickly and to move into a position to come back at an opponent is key to success for wrestlers. This drill helps wrestlers develop quickness and agility while improving their ability to recover from being put on their backs or thrown to the mat. Between 15 and 20 numbered cones are set up around the wrestling mat to form a square. The cones should be 3 to 8 yards (2.7-7.3 m) away from the center of the mat. The athlete lies down in the center with the back on the mat. The coach gives a go command followed by a cone number. On the go command, the athlete rolls over, gets up as quickly as possible, and sprints to the designated cone. The athlete comes back to the center of the mat, lies down again, and repeats the drill (running to a different cone each time) for four to six reps, with a 45-second rest between runs. The athlete must maintain body control and balance when rolling over to get up from the mat and should eliminate wasted motion to improve the speed to get up and recover from being on the mat. For variety, the cone pattern can be varied.

In Developing Agility and Quickness, leading experts from the NSCA offer more than 130 drills, 12 agility and quickness tests, and 15 sport-specific training plans to help athletes gain a step on the competition. The book is available in bookstores everywhere, as well as online at the NSCA Store.