This excerpt from NSCA’s Essentials of Sport Science briefly explains the force-velocity-power profile and how it can give strength and conditioning coaches a more holistic view of athletes.

Regardless of the task and muscle groups involved, the maximal amount of force that the neuromuscular system can produce during a movement depends on the movement velocity. As mentioned before, the alteration in force production when velocity increases is not the same for all athletes. When one focuses on concentric muscle actions (observed in most sports), this is described by the well-known inverse force–velocity (F-V) relationship. When explored using isolated muscles (and sometimes in monoarticular movements), the F-V relationship has been described by a hyperbolic equation (15, 46). However, during multi-joint functional tasks such as pedaling, squat, bench press, or sprint running movements, linear F-V relationships are consistently observed (17). This linear model is not a simplification of the more complex hyperbolic one. Instead, it is what has been experimentally observed each time maximal force production was assessed during a multijoint movement at different velocities. Researchers (37, 38) have shown that the F-V relationship is linear until at least 90% of the maximal theoretical force (38) and 80% of the maximal theoretical velocity (37), as shown in figure 13.2. This difference in models is likely explained, in part, by the different biological levels at which force production capacities have been assessed, from isolated fibers studied in vitro to sprint running on a track. The physiological, biomechanical, and neuromuscular mechanisms underlying the force measured at these different levels of exploration are different. When measured during multijoint movements, F-V relationships are a complex integration of the different mechanisms involved in the total external force produced during single-joint extension, which are not necessarily implied in the force produced by an isolated muscle. Such multijoint F-V relationships encompass individual mechanical properties of the various muscle-tendon units involved in the movement (e.g., intrinsic F-V and length–tension relationships, rate of force development, muscle-tendon stiffness), some morphological factors (e.g., cross-sectional area, fascicle length, pennation angle, joint lever arms), neural mechanisms (e.g., motor unit recruitment, firing frequency, motor unit synchronization, intermuscular coordination), and segmental dynamics (3). These properties describe not only the fascicle mechanics of a given muscle, but the overall dynamic force production capabilities of the entire limb, which can explain the differences observed with in vitro conditions for a single muscle.

The inverse F-V relationship should not be confused with the fundamental principles of dynamics stating that when the external force applied to a mass increases, the acceleration of this mass increases and so does its velocity. This positive association between the force applied to a system (e.g., athlete, ball, racket) and its resulting velocity is often the first intuitive idea about force and velocity. This is not in opposition to the inverse F-V relationship mentioned earlier, which refers to a decrease in the maximal force production capability of an athlete when movement velocity increases. Moreover, since power output is the product of force and velocity, the maximal power output an athlete can develop also changes with shifting velocity. For multijoint movements, this is described by a second-order polynomial function in the form of an inverted-U (see figure 13.2; 8, 36, 43). Both individual F-V and P-V relationships offer an overall view of the force and power output production capabilities during dynamic contractions. This is the athlete’s force–velocity–power (F-V-P) profile (see figure 13.2). It represents a more complete view or spectrum than one, two, or three tests in specific conditions (for instance, 1RM squat, vertical or horizontal jump, 20-m sprints). 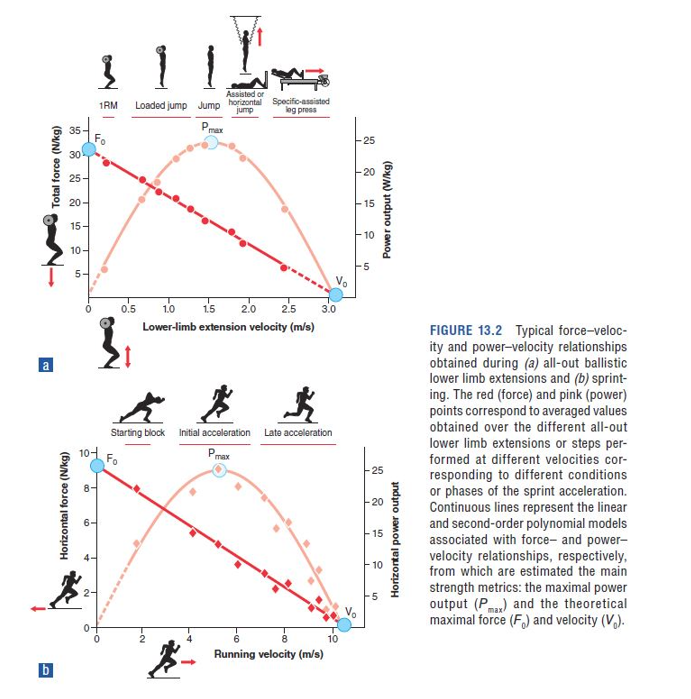 To determine individual F-V or P-V relationships, the athlete has to perform an assessment of a given task (lower limb extension, for instance) at different velocities, executed maximally regardless of the external resistance or velocity threshold. The only parameter that changes during the course of the assessment is the velocity, not the other movement modalities, and especially not the range of motion of the various joints involved in the test. In practice, different solutions exist to induce changes in movement velocity. Simpler methods consist of changing the resistance or inertia of the moving system (using additional load, elastic or pneumatic resistance or assistance), which by itself implies a change in the velocity (due to principles of dynamics), as does the maximal force the neuromuscular system can develop (4, 43). It is also possible to set a target velocity using specific ergometers that adjust the resistance so that the velocity or the force produced are kept quasi-constant throughout the movement (47, 48). Force production and limb extension velocity have to be measured to obtain one value per limb and then establish F-V and P-V relationships. These values of force, velocity, and power that are considered to determine the F-V-P profile during limb extension can be the instantaneous peak values observed during the movement or the values averaged over the entire movement (limb extension, for instance). Even if peak values are easier to detect, the averaged values make more sense when one is assessing the maximal force or power production capabilities over a single movement. In addition, peak values of force, velocity, and power do not occur at the same time during an all-out movement, and instantaneous values correspond to very specific anatomical and neuromuscular configurations and do not fully represent the entire dynamic capabilities of lower or upper limbs during a movement. Force–velocity–power profile testing is presented in greater depth in the next section.

NSCA’s Essentials of Sport Science provides the most contemporary and comprehensive overview of the field of sport science and the role of the sport scientist. It is a primary preparation resource for the Certified Performance and Sport ScientistSM (CPSSSM) certification exam. The book is available in bookstores everywhere, as well as online at the NSCA Store.