This excerpt from NSCA's Guide to Sport and Exercise Nutrition briefly discusses micronutrients and their role in optimal athletic performance.

Micronutrients include vitamins, which are organic compounds, and minerals, which are inorganic elements that exist as solids; they cannot be produced by the body and thus must be consumed in food and beverages. Micronutrients form bioactive compounds, generally proteins. They are not direct sources of energy but facilitate energy production and utilization from carbohydrate, fat, and protein; transport oxygen and carbon dioxide; regulate fluid balance; and protect against oxidative damage. As shown in figure 6.1, many of the B vitamins (thiamin, riboflavin, niacin, B6, and pantothenic acid) and some minerals (iron, magnesium, copper, and zinc) are needed for the metabolism of carbohydrate into energy for muscle work. Iron, copper, B6, B12, and folate are required for red blood cell (RBC) formation and oxygen (O2) transport to muscle cells. Zinc is essential for removal of carbon dioxide (CO2) from working muscle and recycling of lactate to glucose. In the adrenal gland, vitamin C is necessary for the production of epinephrine, which acts to release free fatty acids (FFA) from adipose tissue. Niacin may block the release of FFA during exercise. Vitamins C and E, beta-carotene, and some minerals (zinc, copper, and manganese) neutralize reactive oxygen species (ROS) and prevent free radical damage in muscle and other tissues.

Evaluation of micronutrient needs for optimal physical performance requires concurrent assessment of nutrient intake and biochemical measures of nutritional status (Lukaski 2004). Only a limited number of investigations have met these criteria. Sole reliance on self-reported food intake to characterize nutritional status is problematic because of underreporting of food intake (Magkos and Yannakoulia 2003). Assessment of the adequacy of micronutrient intakes relies on the appropriate DRI (RDA or AI) (IOM 2003). Low micronutrient intakes generally result in subclinical deficiencies characterized by decreased biochemical indicators of nutritional status and impaired physiological function. Figure 6.2 presents an overview of how a subclinical deficiency of several minerals (zinc, iron, riboflavin, and magnesium) leads to reductions in exercise performance and markers of performance. Overt or clinical deficiency is rare without excess loss or impaired absorption (IOM 1997, 1998, 2000, 2001). 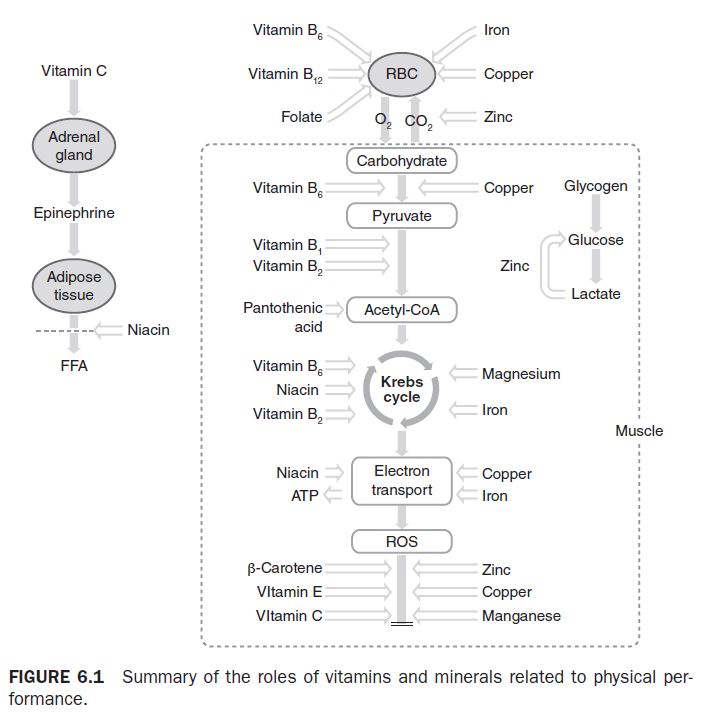 NSCA’s Guide to Sport and Exercise Nutrition will lead you through the key concepts of sport and exercise nutrition so that you can assess an individual’s nutrition status and—if it falls within your scope of practice—develop customized nutrition plans. The book is available in bookstores everywhere, as well as online at the NSCA Store.