One common thread that provides an advantage for all soccer players at any position is to be faster than the opponent. Incorporate these drills into your next speed session.

The following is an exclusive excerpt from the new book, Developing Speed, a recent release in the NSCA’s Sport Performance Series with Human Kinetics. All text and images provided by Human Kinetics. 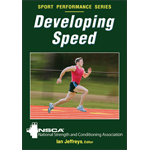 Speed is a vital component in soccer and plays a key role in determining success in all playing positions. When the goalkeeper sprints off the line to smother the ball at the feet of the oncoming striker or the striker surges to the near post to head home a corner, it is clear that greater speed can significantly enhance the performance of any player.

Lateral Ball Drop
Aim: To develop the ability to accelerate laterally in reaction to a stimulus.

Coaching Points
• The athlete performs a hip turn, opening the hips toward the direction of motion, and shifting the bodyweight in this direction.
• Strides are as rapid and powerful as possible.

Variation
The distance between the athlete and partner is increased after each successful attempt. The athlete can perform a variety of skills, such as shooting, passing, and initiating a dribble. The partner can drop the ball in front of the athlete or to the rear.

Decelerate to a Skill
Aim: To develop the ability to decelerate and carry out a soccer skill.

Action
The athlete assumes an athletic position at cone 1. Cone 2 is 5 to 10 yards ahead. A coach or partner stands with a soccer ball near cone 2. The athlete runs toward cone 2 and then decelerates to be able to carry out a soccer skill (e.g., making a shot, controlling a pass ball, making a save). As the athlete decelerates, the coach or partner feeds the ball in a manner appropriate to the desired skill, and the athlete performs the skill (Figures 3 and 4). This skill can be predetermined or the athlete can be given options and asked to respond according to what evolves as the ball is delivered.

Coaching Points
• The athlete lowers the center of mass while decelerating and rapidly adjusts the stance in preparation for the skill.
• The athlete shortens the stride length as he or she approaches the cone.
• The feet are placed wider apart (hip width or slightly wider) to assume an athletic position, and the bodyweight is over the balls of the feet.

Variation
Variations can be made in the distances used, the initial speeds of movement, and the skill performed.

Developing Speed, published by Human Kinetics, features several other soccer-specific speed drills, along with drills focused on baseball, basketball, football, ice hockey, rugby, soccer, tennis, and track and field. The book is available in bookstores everywhere, as well as online in the